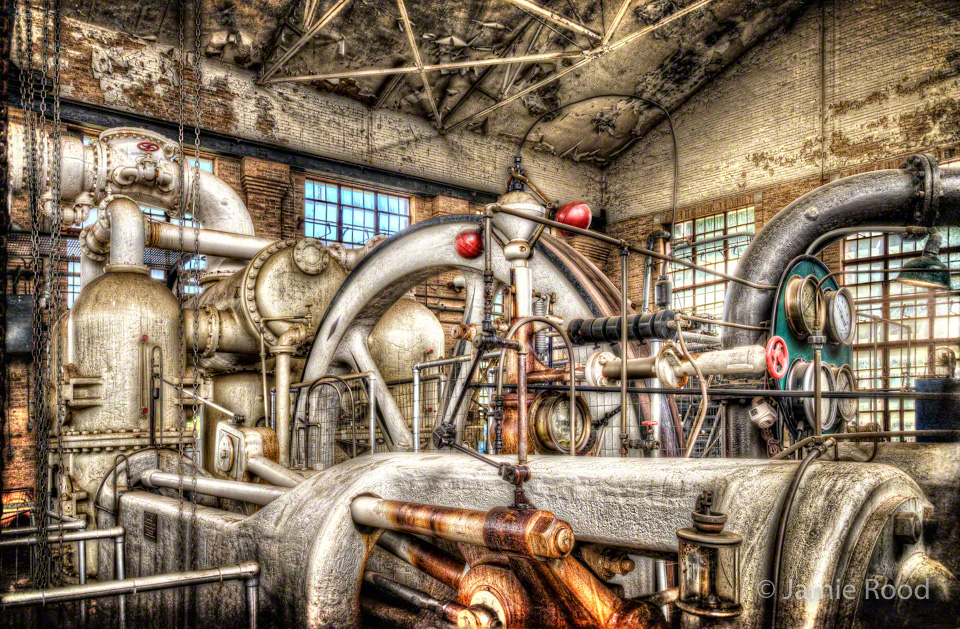 The McNeill pumping station is a turn-of-the-century (the LAST century, that is) water works that was the last known steam-powered municipal water treatment plant in operation in the United States when it’s steam engines were finally retired in 1980.

Photographic-based with extensive hand-editing. Upon visiting, you may see a ‘cleaner’ background and more of the electrical conversion equi9pment – I left one small piece 😉 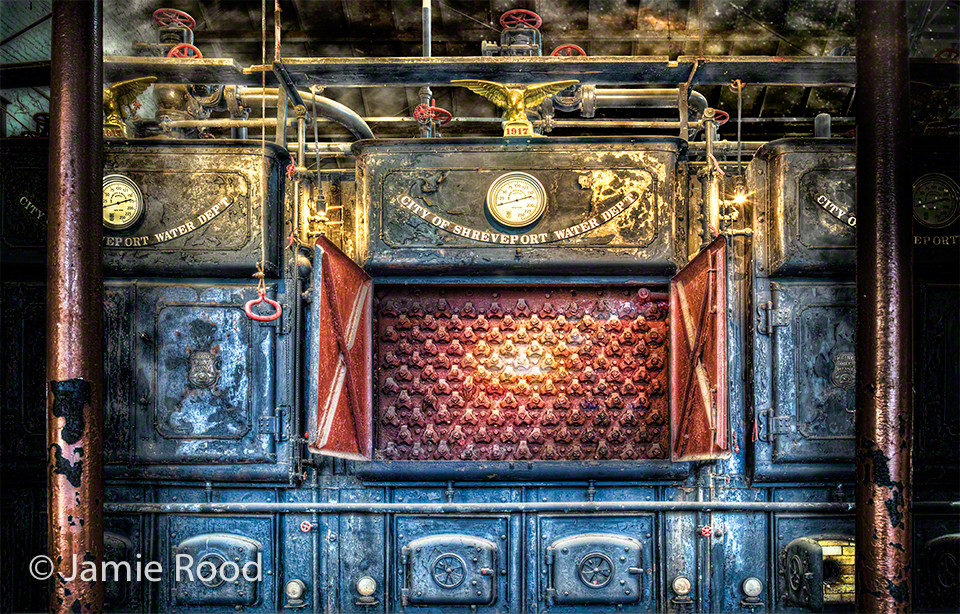 Here is the ‘stylized’ boiler including a hint of the stars shining through to recall a missing roof due to fire in the past. Note the detailed accents and ‘artistic license’ used to create a dramatic image to bring interest into a space.

Really cool reconnaissance plane born in the 60’s about the same time as me 😉 Lockheed SR-71 Blackbird leaked fuel on the ground cause it had to ‘get up to speed’ for the metal pieces to expand and fit together – built for flight, not sitting in the hanger. Artistic license – yes I thought the air inlet needed some cool red glow – that where a lot of the magic happens here with the ultrasonic flight and this is my art, so get over it 😉 Yeh, that blackbird/raven is flying pretty high in the background too 😉

I had been wanting to do something with this and while in Arizona for the Arizona Fine Art Expo (AFAE), I used it for a ‘challenge’ piece I called ‘SR-71 Bovine’ featuring a cow as pilot. So I decided to go ahead and finish out just the plane version to add to my collection. And for all you Air Force Farmers out there, both versions are available 🙂

More info on the SR71 Blackbird…

# 4 in the series…
Big Boy No. 4014 touring the Union Pacific system throughout 2019 to commemorate the transcontinental railroad’s 150th anniversary.
See more at: Union Pacific Steam

# 3 in the series…
Big Boy No. 4014 touring the Union Pacific system throughout 2019 to commemorate the transcontinental railroad’s 150th anniversary.
See more at: Union Pacific Steam

Got this shot as a sea of people were rushing in to the marked off area after the train stopped. I do a lot of roughnecks in the oilfield, so I guess getting the guy working just came natural..

With this work I wanted to:

Catalyst: I had several train fans recently request I catch this restored historic locomotive as it made it’s way across Texas this Fall as part of the 150 year anniversary tour. Researching I realized this shoot would be a little more ‘touristy’ than I am normally comfortable with. Well, I could bring my grandson JC and that would make it ‘Okay’. And while this was not back-packing to an obscure location to capture a scene that no one else has, it is very ‘Americana’, the train and the whole event, so we’ll go with that angle. JC wasn’t able to go so I had to capture it ‘for him’.

My Plan: Ha! – the ‘plan’.. Get familiar with the train and dynamics in Luling, try to catch a couple crossings on next leg, and get something grande in the smaller town Flatonia. I had been on the Union Pacific Steam Club Facebook page, google maps, scoping vantage points considering the sun at that time of day, hourly weather, etc. On the way down I did the preparedness thing and stopped to gas up (& empty my bladder), so I could drive from Luling to Flatonia to get back ahead of the train without worrying about that. Well, I had forgotten my wallet, found $3.50 in a ripped $1 bill and some change – so there went stop 2 🙁 ah they have a viewing Pavilion – and that says too organized anyway 😉 I’m gonna gonna have to get my shot in Luling. 😉

Touristy – Yeh, that was an understatement, upon arrival I saw people parking a ways away from the stop, so I figured I’d better just pull into the lot and walk a ways. Seemed there were thousands of people out on this Wednesday midday in this small town: school kids, families, business people, train enthusiast, and a quite a few there to ‘capture the moment’..

The Stop: Right off saw my show artist friend Steve Riley down from Dallas. They were following to Eagle Lake. We caught up while waiting for the train (which was about 30 minutes late). Even though he and I were first in from the front when the train stopped, there was no setting up and getting a tripod shot. I heard lot’s of ‘photographers’ complaining people were in the way. Really? What did you expect? – this ‘event’ is for Rail-fans of all ages and people are there enjoying the moment in what many were calling a ‘historic event’. Not the shot I was after anyway, so a few snaps and I’m down the road to capture the departure.

Staking My Space: Walking towards the outskirts of town, saw my neighbor RJ setting up a GoPro on the side of the tracks. Setting up on the ‘dark side’ I asked. ‘Oh yeh I guess it might be better on the other [South] side’ he replied. Don’t get my wrong, despite being a hobbyist with a full-time job, I suspect he has as much or more photography knowledge than I do. 😉 We kept moving down the tracks, but there were people everywhere and he said the trestle up the road had several people shooting so I guess there were going to be ‘others’ the whole way. So I left RJ and headed up a little more, just short of a curve to avoid massive power-lines above it.

Ready: Found my spot, got down low to one knee.. – Okay so I was sitting on my butt, hey, I was waiting and I had on jeans so I can swivel fine. Switch to my zoom lens to be safe and watch. Finally, she – or I guess ‘he’ (named Big ‘Boy’ after all), started moving. A little light on the steam which I thought good, time “it’s” here could be steaming good. Well not so much, but I am a pretty good digital artist, so no worries.

The Shot: I know the shot(s) I want but begin to snap early just in case, 3 or 4 frames then here it comes – what I visualized. But I’m too tight so I grab the lens and crank hard (a wee bit damaged it is) to get past that threshold to 24mm. I get it framed (yes we’re talking about less than a second for all this, cause it’s ‘moving’ pretty good now. Bam, I got it and a couple extra, with the side steam going by.

Fly in the Gravy: I swivel to get the nice shot I set up of the locomotive and cars rounding the bend and ‘son of a..’ get this Norman Rockwell of saggy-ass britches from behind standing there in pure bliss watching the scene. I chuckle, get up and and shuffle to get the train rounding the bend with more people gathered around. I got my shot – I’m good 😉

We’re Done Here: I walk back to check on RJ picking up his collection of smashed pennies & nickels (he didn’t want to risk loosing a quarter). Said his GoPro got ‘steamed’ inside. He was gonna walk around the town and check it out.

When I got back to the truck, searched again for some more stray money, but I was ready to get back and start working on this anyway 😉 Turns out I could’ve made it the extra 60 some miles detouring around to Flatonia, but another day. This part of my job was done, and did witness a little History… – and a whole lot of happy people 🙂

Categories: Railroad, Uncategorized
Tag: train
Galaxie Sunliner
Ford Galaxy Sunliner – Convertible version of the 1960s car named in response to the Space Race.
Depicted ‘cruising by a sun through outer space’.
Photographed in Odessa, Texas in Fall of 2014 – across the street from Ector Colosseum.
Have had this in my head for quite a while and finally fished it! 🙂
To purchase:
http://jamierood.com/shop-ls/product/gxsl-im/

The Sunliner emblem was on the side – I moved it to the rear license plate. 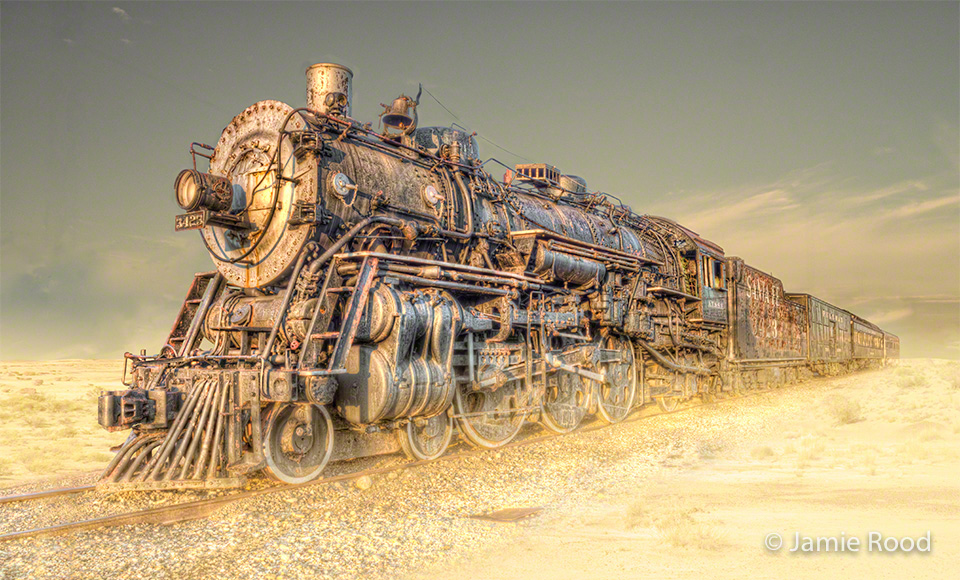 AT&SF Temple Steam Train – a glowing, ghostly version of the train in back of the Railroad museum in Temple Texas.
We were setup for  a show there in August and Have some more interesting images to come…

Tattered American Flag –
Unity in all we’ve been through..

Shot a while back but thought it might be appropriate time to release beyond the original coaster version.