Epic – looking landscape with light emitting from the flat stone with a deep turquoise stream flowing through. The brush to the right forms a kind of countryside (in the wide version) with a gallery of people looking on and maybe someone working. The ominous ‘sky’ also reflects the light as a sort of inverted moonlit ocean.

Actually it is created from a series of shots I took in a cave at Reimer’s Ranch (near Hamilton Pool up a stream bed from the Pedernales River just outside Austin). I added the water and and some some special effects to give the richer colors. The sky is actually the cave ceiling with a little blending magic to produce the colors.

This is a scene I’ve wanted to create something of for a couple of months so I got to work yesterday evening – instead of going to bed early after a relatively non-productive day (don’t I get a break to rest after the long weekend?;)). This is one of those where I spent a good amount of time ‘staring’ into the image’ to pick out things that were calling out to me and finding the ‘theme’. What you are seeing here is a culmination of spirituality, experiences and my digital skills over the years – look for more to come 🙂 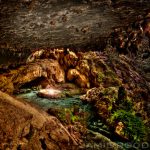 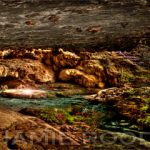 For me, it’s an idea bursting into creation – turning the enclosed cave into an entire world, generating attention. Just as an idea emanates from the darkness of our ‘cave’ and fills our minds with thoughts and possibilities.

Please comment on ‘what you see’, what the work ‘means to you’ or just what you feel when gazing into the scene. Also interested to hear if the square or wide version appeals to you more?

Thanks to patrons who have given me my best winter season ever! 🙂

As some may know, I have been traveling around to the markets at 20-25mph in my green van. Although my van will take awhile to be repaired, I was able to fix my Jeep Wrangler & will be ‘mobile’ again tomorrow with a new trailer to haul my & the markets equipment etc. – just in time for the Rites of Spring in Lockhart next weekend 😉 Test drive will be this Saturday down to Mother Egan’s.

Really love the luxury of my van, but my Jeep & I have been together since I snagged it off the showroom floor in 1991 and we have some familiar history – so we’ll be good 😉 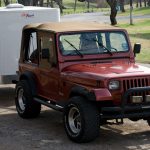 Tonight I took the bus downtown to a group meeting where one of the discussions was about promoting ‘the intersection of life & art’. I took the bus to save some petrol and on my return, after waiting quite awhile, Bus 1L speed by me even though I was waiting with my ticket in hand. Bus 15 saw this and came immediately to my rescue and followed Bus 1L several blocks with horn blaring until it would stop and let me on. Not the first time I & others have been passed up – once, after over an hour waiting with some other riders of Asian descent, and several busses zooming by, I stepped out in front of an approaching 1L bus only to have it swerve around me at the 1L stop.

Anyway on the way home you could hear several conversations at once: a man in the back talking about riding with generals in Iraq, a young man talking to people about Jesus and some female heavy metal musicians he knew & idled etc. Soon a man appearing old and dirty came down the aisle. I reluctantly moved over to allow him to sit beside me. As he sat down & began to speak, I braced myself for the foulest of odors to come from is mouth to my nose only inches away, but to my surprise there were none & in fact he did appear not to smell at all. ‘Bob’ was his name – tired, wrinkled skin and straw cowboy hat with a friendly Texas drawl. One of several characters on the bus that could make a fantastic photograph in the right setting. He rambled on about crocodiles and how he and his friends would save me from them, asked me to remind him of my name several times, talked about his love who lives in another town, and that he could smell someone ‘had the good stuff’ (i.e. drugs) onboard today. I listened politely – best I could follow anyway while cautiously covering my hip pack with my left hand (so I could continue shaking his hand time-to-time with my right one). Before long there was a full crowd of all sorts crammed in the aisles, sitting on the floor, greeting friends etc.

A trio of ‘punked-out’ riders boarded: one thin male with red mohawk and spikes all over his jacket & apocalyptic scene painted on the back, a beautiful intellegent-looking young lady with ‘f*ck the flag’ & ‘666’ on hers with a whole myriad of colors in her hair, body rings and the whole bit, and a dark-haired young male in large overalls who looked like one of the Gieco cavemen with a look of ‘deep altered reality’ on his face. They were from around Albuquerque – I guess passing through. Caveman was clutching some stones wire-wrapped into pendants and shining a flashlight in fascination on one that was translucent. Our eyes met a couple of times – he started with a boyish grin which turned to a quite, acknowledging smile. A white haired woman who boarded at the Capital presented the young girl with a pretty purple glass butterfly, perhaps too big to be a pendant. The girl was visually grateful and began cuddling and stroking the piece as if was the most valuable thing she had ever held. I wondered how long she would keep it – if it would get traded or discarded or if it and this moment would stay with her forever.

As I got up to stand by the door, ‘Bob’ took a couple more swigs from his flask & told me he’d remember me in his prayers tonight and asked that I say say a prayer for him. I assured him a couple times I would and smiled. As the bus slowed, there by the door was the young girl still affectionately stroking her treasure…

this was my stop – at the intersection of life & art…