I debuted my new work ‘Gorilla Falls – Contemplating the Journey’ this month in Colorado . 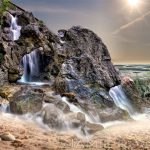 The head rock of the falls (near the base of the Hanging Lake trail) looks like a gorilla, so named it ‘Gorilla Falls’. The ocean, sky & beach shots were taken at the beginning of my journey at Montauk Point, Long Island New York in May 2009 and the falls in Glenwood Canyon, Colorado near the end in June 2009.

Interpret the scene and the title as you will… 🙂

My gosh it is high resolution – I had to shoot the falls in 11 segments of 6 exposures each to get everything in. I was crouched straddling part of the falls against the rack wall between me and the trail. Even if I could have pulled back to get everything in one shot, I wouldn’t have cause it would changed the perspective. Yeh, guess I need a wider angle lens – that’d help a bit 😉 The Sky (2×3 exposures) the ocean (1×3 exposures) and the beach (1×6 exposures) were taken about a month earlier on my trip at Montauk Point in New York (east end of long island) around the lighthouse.

So whats that – about 81 or more photographic frames and somewhere around 100 megapixel resolution? Had to save in multiple files in multiple stages to get around the 2Gb file limit. Yes takes forever to save – my poor mac 😉

Quite a bit of work to blend everything – especially around the leaf which has gotten comments. Course blend lighting, digital touch-up over seems etc. and more…

Thanks & congratulations to John (near Salida, CO) and Erick (Crested Butte, CO) for acquiring #1 in the matted & canvas editions respectively.